We are launching the 2nd Hummingbot governance proposal as well as the new voting portal on our Hummingbot Miner app!

As mentioned in our previous governance post, votes for this current proposal will be based on Hummingbot Miner rewards, giving the ability to vote to members of the community who have been participating in and supporting currently active Hummingbot liquidity mining campaigns. We welcome any suggestions and discussion on our discord channel #governance-chat as we continue to evaluate and iterate on how best we can get the community involved in deciding the direction of Hummingbot.

Which of the following community-developed exchange connectors should be included into the core Hummingbot code base in the next release (0.34.0)?

Similar to our first governance vote, the Hummingbot core team will review, test, and incorporate the exchange connector for the winning exchange into our core code base, which will become an officially supported connector.

We have enabled a new VOTE tab on https://miner.hummingbot.io which shows all proposals: 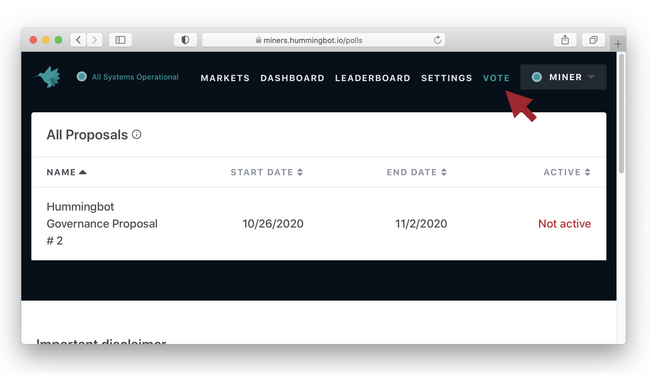 After selecting the proposal, you see the following screen: 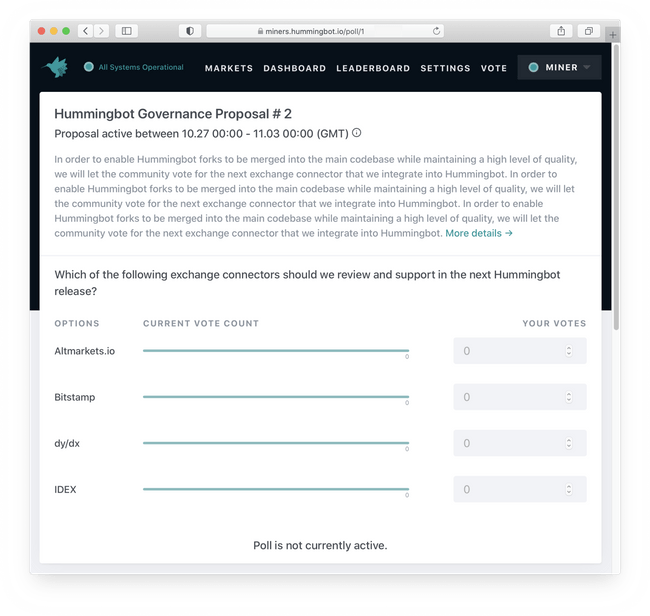 You can allocate your votes between the different choices.

Below are the four exchange connectors that you can vote for:

Altmarkets.io is a centralized cryptocurrency exchange that was established in 2018 and is located in the United Kingdom. There are 51 coins and 68 trading pairs on the exchange.

The Altmarkets.io connector was developed by one of our active community members, TheHoliestRoger, who has been an active contributor to the Hummingbot codebase.

dY/dX is a decentralized trading platform that currently supports margin trading, spot trading, lending, and borrowing. dYdX runs on smart contracts on the Ethereum blockchain, and allows users to trade with no intermediaries.

The dy/dx connector has been developed by one of Team Hummingbot’s development partners who has developed several other connectors for other exchanges.

The IDEX team has developed a connector and will be issuing a pull request in the next few weeks.

Vote for the next exchange that we integrate into the open source Hummingbot codebase!

The results are in! We also discuss the next steps for Hummingbot governance.